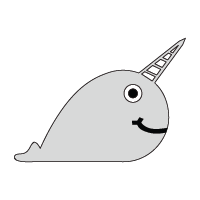 An imaginary sea unicorn, and a set of events that celebrate all the interdisciplinary work in information security—policy, law, academia, and more.

Narwhal is a place at ToorCamp and Hacker Summer Camp (Black Hat USA, Security BSides Las Vegas, and DEF CON) designed to provide a useful space for the “security plus” (security+policy, security+law, security+arms control, security+sociology, security+wonkery, etc.) crowd to meet, hang out, and discuss stuff where it’s not so ridiculously loud as the con floor. Generally, the idea is that this is a resource: a meeting or work area during the day for anyone who needs one, and in the evenings, a relaxed discussion group or salon.

Narwhal is a gathering point for two separate (though closely related) ideas in security:

Why a Narwhal in particular? There are a few reasons, but the simplest is that parts of the security community like to pretend that work that’s not all-offensive isn’t real security work—or that people that aren’t offensive for offense’s own sake aren’t security people, and don’t really exist in the industry. The truth is that, like narwhals, we do exist (even if it’s hard to prove). We’re important to ecosystems and the world of security, and we’re often misunderstood. And we could use a space to hang out in (because even though we’ve had many great tech policy discussions in a nightclub during a Black Hat party, it’d be neat if we could hear ourselves think while planning the next response to cartels named after Dutch suburbs).

The genesis of this suite came during hacker summer camp 2016, when Brendan and a group of five other wonkish sorts tried for 45 minutes to find a single place anywhere within 100 miles of DEF CON that wasn’t so loud they couldn’t hear each other talk. They failed, but an idea was born. Thus, Narwhal, where those of us who do security in weird ways can talk, scheme, plan, and hang out as a useful addition to all the wonderful things happening at the various cons!

Who should come to the Narwhal space? If you’re reading this site, likely you! We encourage anyone of good will and interesting conversation to join us. Not allowed: bigots, haters, and people who think that the only useful security work is popping shells. (People who just like popping shells in concert with a larger panoply of security work are, of course, fine.) Know someone else who you think should know about this? Send them to this site!

In Vegas, many people will have keys to the suite; people with keys are welcome to let others in and hold open hours. (Need to find a keyholder? Send a Twitter DM to @NarwhalBe.)